Jetties is a cross disciplinary collaboration between writer/translator Madeleine Campbell, sonic artist Bethan Parkes, visual artist Birthe Jorgensen, and dancers Laura Gonzalez and Marta Masiero. Our collaboration is based on experiments with staging translations of poetry and prose by Algerian Author Mohammed Dib (1920 – 2003) across languages as well as disciplines. Aimed at fostering individual narratives in migrant communities through gesture, sound and movement, our workshops offer new ways of expression and witnessing in a safe and artistically challenging environment. 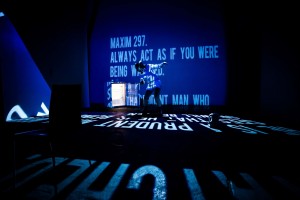 The Manual Oracle is a theatre project created by director/writer/designer Phoebe von Held and inspired by a Spanish seventeenth-century handbook of survival strategies. By using enigmatic historical texts as a starting point and projecting their resonances on to contemporary contexts, Phoebe’s work seeks to probe into conditions that determine today’s life politically, psychologically and sociologically. In ‘The Manual Oracle’, this exploration concerned the experience of paranoia in the baroque court and its persistent relevance in today’s society. Collaborative methodologies of translation played a crucial role in exploring this contemporary notion of paranoia. Together with a group of collaborators affiliated with the Institute of Psychiatry (IoP), King’s College London, the original text was read, discussed and filtered through personal as well as professional experience, knowledge and interpretations. The group of collaborators included mental health service users suffering from psychosis, psychiatrists, psychologists, researchers and therapists. The research collated through those intersemiotic dialogues was then rewritten into a series of new scenes that eventually formed ‘The Manual Oracle’ as a play, but also other production elements such as sound and visual design were informed by the research undertaken with the IoP group. While translation methodology included the translation of some of the original seventeenth Spanish text into contemporary English, the more important mode of translation explored in this project concerned the intersemiotic retranslation of a particular baroque sensibility into contemporary sensibilities which in turn were reshaped into new aesthetic forms.

“‘Still’ in Translation”, Digital Collage. The image shows Denise Riley’s original poem and Heather Connelly’s translation plus the trail of 7 visual translations, which came before hers (Feb-May 2015).

Founded and animated by Ricarda Vidal, Translation Games explores the theory and practice of translation in literature and the fine arts:  “We are interested in the various layers, levels and facets of communication – visual, tactile, acoustic, vocal, gestural, olfactory, and so on… That’s why we don’t only translate from English to French, but also from film to choreography or from Spanish to silk painting.”