The Programme Committee of the 2017 Conference invites proposals for individual papers and poster presentations. Please submit your proposals using this this form. Deadline for submission has been extended to 31 October 2016.

All queries should be addressed to: CLE2017@ibl.waw.pl 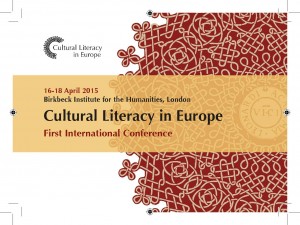 Whether you could make it to the 2015 conference or not, send us a postcard expressing your say on the Cultural Literacy project, its present and future.

The countdown to the start of the conference this afternoon started!

To get in the mood you might want to read this recently published article by one of the member of the Steering Committee of Cultural Literacy in Europe 2015 conference and driving force of the project, Professor Naomi Segal. She contextualises the project and its relevance for the future of the social and cultural value of our research.

The low-fi Information As Material installation has just opened at the Peltz Gallery, Brikbeck University.

There — and for now only there — you can pick up a free Xerox chapbook of the expanded second edition of Do or DIY. When they’re gone they’re gone. Here’s a taster:

“In the same year that James Joyce’s Ulysses and T.S. Elliot’s The Waste Land were published, Carlos Díaz Loyola self-published his book of poems Los Gemidos. Loyola, a Chilean writing under the nom de plume Pablo de Rokha, only managed to sell a few copies. Indeed, both the public and the critics were so indifferent that the author sold the bulk of the edition by weight to the slaughterhouse where it was used to wrap meat. Today, accordingly, it is almost impossible to find a first edition of Los Gemidos, which is now considered to be one of the fundamental works of the Latin American avant-garde movement.”

Another recent IAM freebie can be downloaded from the Eclipse Archive. Nothing: A User’s Manual is a 48pp PDF featuring a long introductory essay and a preliminary bibliography that both try to map ideas of nothing and nothing-ness as they relate to late-modern and contemporary art practice. In no small part we want to share it as a teaching aid so please feel free to use it, misuse it and extend it. The download link is here.

Please pass on info about both projects.

As ever, recent books etc are listed on informationasmaterial.org.

Please remember the deadline for our Call for Papers is coming up (31 August 2014): a month to go!

Posters and flyers to hang around are now available in PDF:

Registration for the conference is now open!