Do or DIY (Expanded Second Edition) 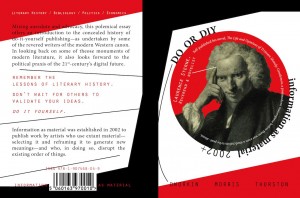 Do or DIY (Expanded Second Edition) (2015) revisits a pocketbook essay and art installation originally made in 2012 for the Whitechapel Gallery (London). Both elements mixed anecdote and advocacy to introduce the concealed history of do-it-yourself publishing as undertaken by some of the most revered writers in the Western literary canon, from Laurence Sterne to Irma Rombauer via Virginia Woolf and Derek Walcott. 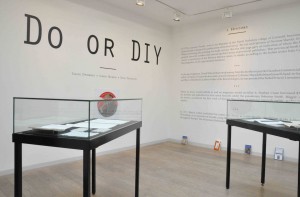 Since 2012, translations of the essay have been prepared in Spanish, German, French and Italian by researchers in Santiago, Berlin, Paris and Montevideo. In turn, each translator has both translated the existing content and added further such examples from the literary history of their native country. As such, each translated edition expands the manuscript, like a snowball, developing a micro-political network of localised knowledge and small-press publishers.

That snowball will keep rolling but this newly commissioned low-fi installation documents the project to-date. It presents a sample of the anecdotes added since 2012 on bi-lingual posters, reflects on the place of self-published literature in the economy of the modern book trade, and offers free-to-take Xerox copies of the expanded manuscript in English for the first time.

Information As Material is an independent publishing imprint led by the editorial collective of Simon Morris, Craig Dworkin and Nick Thurston, begun by accident in 1998 but formalised in 2002 and based in the North of England. They have published over forty books, chapbooks, pocketbooks and digital documents; curated numerous exhibitions, educational and research events; and produced art works under the collective name IAM. Across all of their activities, Information As Material explore the historical, ethical and literary lessons of DIY culture as they affect new practices of writing and publishing, at the core of which is an inclusive commitment to collaboration. Do or DIY (Expanded Second Edition) is co-produced with Riccardo Boglione, Kate Briggs, Annette Gilbert, Marianne Groulez, and Carlos Soto Román, and in various ways has been made possible by the kind support of the London Art Book Fair, Whitechapel Gallery (London), Arts Council of England, Das Kapital Books (Santiago), Salon Verlag (Cologne), and the Cultural Literacy in Europe steering committee.

This site uses Akismet to reduce spam. Learn how your comment data is processed.